As featured on Junebug Weddings 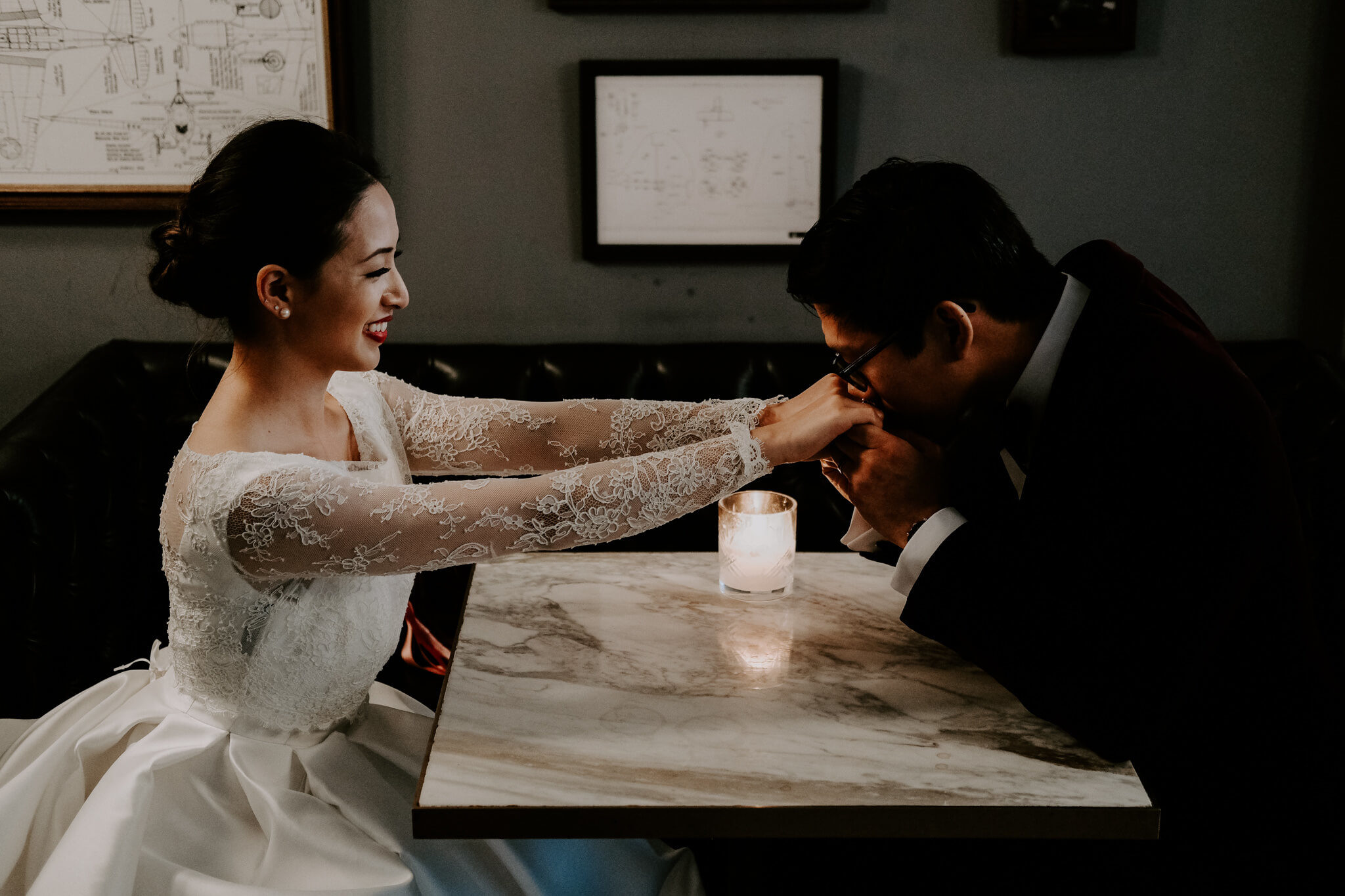 Deb and Adrian got married in a bar on a Saturday morning. Sounds simple enough right? Just wait ’til you hear the whole story!

They decided to toss a bunch of standard wedding traditions because they held no particular importance to them and instead crafted their own perfect day. They danced down the aisle together to Glenn Miller’s ‘In The Mood’ – a track I suggest you play in the background while you scroll, to get yourself.. in the mood!

The day started at the Intercontinental Sydney where they got ready with their family and friends. The makeup was done by Deb’s sister Sarah (who is actually an aspiring surgeon, so you know she’s got a steady hand!) and hair by Kayla from The Future Mrs. Deb and Adrian got ready in separate rooms but had no qualms in walking in to see each other and helping with the finishing touches – just another tradition (or superstition) they did not find relevant. Why not get ready together? It just means you get to spend more time with each other on your wedding day and relish in the nerves and excitement together!

Deb and Adrian planned the whole wedding together, choosing everything from Deb’s Karen Willis Holmes gown to Adrian’s sock’s together – it was a true team effort. Everything was meticulously chosen not only for style but also practicality. Deb made sure that she and her bridesmaid’s all had pockets in their dresses and she was able to go to the bathroom unassisted – it may sound trivial but I can’t tell you how many brides have avoided the bathroom because it was too hard or had to shove things like tissues and lipstick down their bra – insane! Deb chose to forego a veil because of the historic significance of it and instead of flower girls she asked her grandmother to walk her great-granddaughter down the aisle representing 4 generations of girl power!

They describe their style as dark, moody old soul vibes with background jazz. They paid particular attention not only to the colour scheme but also all the fabulous textures that you can see in the bridesmaid’s dresses by Sue Liaw Couture, Adrian’s Tailor and Co jacket and the florals. The Flower Room not only put together those fabulous bouquets, they also created a huge leafy green wall which stood behind them in the ceremony and was then later used as a photobooth backdrop.

The venue they got married in, Kittyhawk, is a dimly lit cocktail bar with gilded mirror frames, rich wallpaper and dark wood – which only further accentuated the dark, romantic vibe they were after. Deb designed and assembled the invitations herself through Cards and Pockets with ribbons from Offray. Those sensational shoes were from Roger Vivier and their bespoke rings were designed by the patient and talented Linda & Co jewellers. Deb says all the ring shop appointments made Adrian wed­angry (wedding version of hangry) because he doesn’t understand why women like ‘silly rocks’, but when he got his timber ring he completely understood why she stares at her rings ALL the time!

The formalities were conducted by the lovely Jenny Jim in both English and Cantonese and the script was customised by Deb and Adrian to ensure it was true to their values. After their civil ceremony and tea ceremony, which was attended only by family and close friends, their friends began to arrive for their ‘engagement party’. Deb and Adrian were tucked downstairs in a booth enjoying a quiet drink while their friends were told they were running late for the party. As the MCs asked the crowd to gather, Deb and Adrian burst through the fire exit and everyone was welcomed to their wedding!!

The night continued and the personalised cocktails flowed. The food and drink at Kittyhawk is SO delicious – it is such a rad place to hold a wedding! Towards the end of the evening, Deb and Adrian opened the extraordinary dessert table crafted by Sweet Bloom Cakes and the treats were snapped up almost immediately by the crowd who had been eyeing them off all afternoon! Such an awesome way to end a killer party! 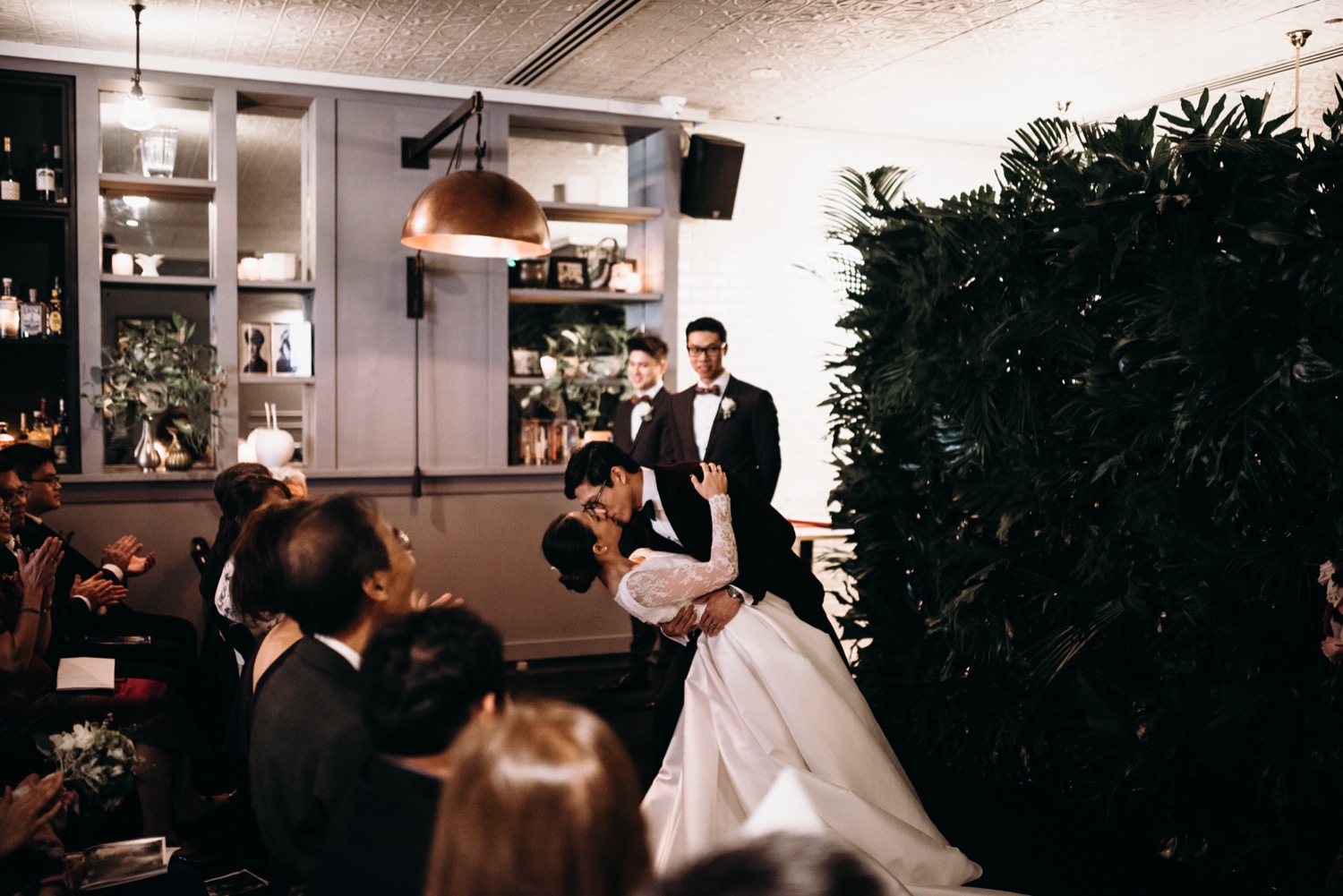 Your Narrative blog will appear here, click preview to see it live.
For any issues click here

Nicola Bodle is an Australian destination wedding photographer. She captures weddings, engagements and elopements throughout Australia and the world. Based on the Mid-North Coast of NSW, she specialises in bold, honest and emotive imagery for adventurous couples and romantic souls.

A few months ago I snuck up to Maleny in Queenslan

These dreamboats are getting married today in thei

stories about me what's on offer contact
YOU READY? LET'S DO THIS!
©2023 COPYRIGHT FOX & KIN
I acknowledge the Traditional Custodians of the lands on which I live and work. I pay my respects to Elders past, present and emerging.